What they reveal, at the highest level, is that many multi-location brands and local marketers are not following basic local and SEO best practices. By not fully building out location pages across Google, Facebook and Yelp and more directly engaging consumers at the local level, marketers are missing opportunities to improve visibility and local rankings. There’s also a correlation between those brands executing well locally and sales growth.

The Localized Social Marketing benchmarking (LSM) study, co-produced by LSA, sought to understand whether a relationship existed between local-social marketing performance and business outcomes for multi-location brands and franchises. It also sought to establish success benchmarks overall and by industry vertical. Disclosure, I was involved in the data analysis and scoring of the SOCi study.

LSM examined 100 randomly selected locations associated with 163 brands drawn from the Franchise Times and Entrepreneur top franchise lists — many thousands of pages. It scored each location’s presence, reviews/ratings and local engagement (e.g., local content posting, responding to reviews, Q&A) on Facebook, Google (My Business) and Yelp. It then generated an overall ranking and rankings by industry.

One might have expected nearly 100 percent of locations for these brands to be claimed/verified across Google, Facebook and Yelp. LSM found, however, that on average 78% of locations were claimed. Google had the highest percentage (85%), while Facebook had 74% and Yelp had 75%.

As one might expect, Facebook was the platform that featured the most local engagement, by far. Nearly 75% of franchise locations were posting content on Facebook. However, these locations were doing very little in the way of content posting on or otherwise engaging customers on Google My Business or Yelp. Only 2.3% percent of locations were responding to Google Q&A, for example.

The fact that only 16% of franchise locations were responding to reviews on Yelp is a surprise, given that reviews are Yelp’s central feature. Multiple studies show that consumers expect a response to their reviews (especially negative/critical reviews) within 24 hours and often much more quickly. This was a major area of weakness and potential improvement for these brands.

Google has the most reviews

Another surprise came in the form of ratings differences across platforms. Facebook had the highest average review scores (4.27), followed by Google (3.45) and then Yelp (2.09). These numbers are for the identical locations. Someone consulting reviews on Facebook would potentially get a very different sense of a business compared with someone looking on Yelp.

One might read this report and conclude that Yelp is less and less relevant and start to ignore the site. And it’s clear that Yelp was the lowest priority for these brands. However, Yelp continues to be an important consumer destination and ranks very well in Google results.

Yelp ranks for 92% of local queries 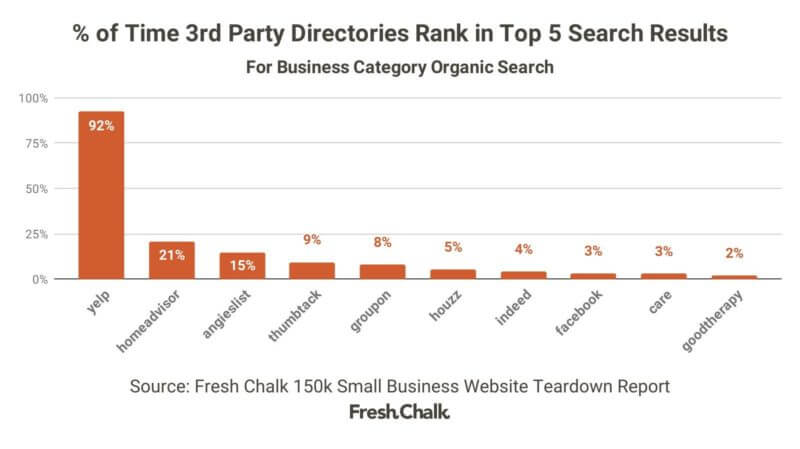 According to the FreshChalk study, “Yelp appears in the top five search results for 92% of Google web queries that consist of a city and business category.” Beyond its status as a consumer destination, it’s an important site for “barnacle SEO.” However, Yelp doesn’t rank equally in the top results for all cities.

HomeAdvisor and Angie’s List (owned by IAC) are the next sites to rank, while Facebook ranks for only 3% of local queries according to this study. (But Facebook ratings appear in Google Knowledge Panels.) FreshChalk points out, however, that Google My Business is the most important “local directory” for ranking in Google search results.

Without question, GMB is the most important local platform or “local directory,” as FreshChalk called it. But Facebook and Yelp should capture similar attention and effort. Many of the brands in the LSM study were paying insufficient attention to Yelp, which also syndicates its content to Bing, Apple Maps and Alexa.

It should be a no-brainer to claim and verify 100% of brand locations across Google, Facebook and Yelp. And while there are practical, logistical challenges in managing hundreds or thousands of locations, profiles with local content and images should be built out for each one. Most importantly, marketers must respond to reviews (and Google Q&A). And do so within 24 hours at the latest.

Conceptually all this is pretty straightforward, though most multi-location brands are not executing consistently or particularly well. Out of a possible 100 points in the LSM study, 89 was the top score (McAlister’s Deli), but 45 was the average across 163 franchise brands. There’s obviously considerable room for improvement.