Google says it is aware of the problem and that it has plans to do more to combat spammers and scammers taking advantage of local listings. It’s not in the company’s interest to jeopardize user trust, yet as many marketers point out, it stands to profit as local businesses turn to paid ads to regain search visibility.

First, a look at the problem. The majority of car repair, towing, electricians, contractors, attorneys, movers and other service categories aren’t located at the addresses shown in Google Maps, according to a survey of experts conducted by the WSJ. Internally at Google, the paper reprted, these categories are termed “duress verticals,” for their proclivity to scams built to ensnare victims when they’re most vulnerable.

These bogus businesses flood local search results by setting up fake profiles in Google My Business (GMB), the free service that powers the business listings in Google Search and Maps. This dilutes search visibility for legitimate business listings, robbing them of potential customers, and puts users in a position to be scammed.

Google’s failure to take down fake business listings and verify real ones is a frustration for many business owners and marketers. Joe Youngblood, an SEO and digital marketer, has been vocal about the problems legitimate businesses face with Google My Business. “Hey @GoogleMyBiz still have several real businesses with suspended accounts, meanwhile fake spam companies with Virtual Office addresses are popping up everywhere. It’s been almost a full week, can you please respond to these??,” Youngblood tweeted this week.

The problem isn’t always as black and white as fake and real local listings, either. As digital marketer Itamar Blauer pointed out, real businesses are also stuffing keywords into their Google My Business profiles in order to rank higher on generic local searches (e.g., “oil change” or “personal injury lawyer”).

Google’s guidelines state, “Your name should reflect your business’ real-world name, as used consistently on your storefront, website, stationery, and as known to customers.” It also instructs businesses to include details like address and service area, business hours, and categories of the other sections of your business.

“The underlying concept of this is that there don’t seem to be consequences for keyword stuffing in GMB listings, as Optimise London have shown that even after Google accepted my edit – they simply added the keywords in again,” Blauer said.

The impact of this manipulation isn’t limited to local search results either. The screenshot below shows that, by adding “SEO Agency” to its business name in GMB, an agency managed to get featured in a knowledge panel for the generic search term “digital seo agency.” 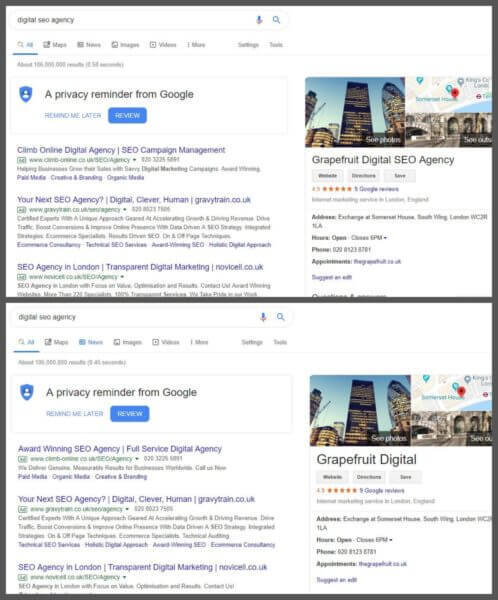 The top screenshot shows how an agency was able to gain a knowledge panel for the non-brand search term “digital seo agency” by putting “SEO Agency” in its GMB profile. Even after the spammy name was reported, the knowledge panel remained, as shown in the second screenshot.

“Now the knowledge graph picks up their GMB for ‘Digital SEO Agency,’ which shouldn’t be allowed and is only the case because of their GMB title,” Blauer explained. Even after the listing was corrected, the company’s listing remained in the knowledge panel, despite ranking seventh in the standard organic listings.

“Right now the name of the business has a huge impact, and fake listings just use target keywords, leading to massive gains,” Youngblood explained. Last year, he ran an experiment that revealed that on average, spamming or keyword stuffing the GMB business name helped a location improve by at least 9.53 ranking positions.

How Google got into this situation

Some marketers say Google didn’t take the problem of listing authenticity seriously enough from the start. “As those of us in the YP [yellow pages] industry watched Google enter into providing local business information, we thought they had quite a bit of hubris,” Chris Silver Smith, formerly a technical liaison for a deal between Superpages and Google Maps and now president and strategist at Argent Media, said.

“There was a naivete in much of their approach that translated into all sorts of goofs and errors over time. Instead of hiring people who were highly familiar with the issues inherent, they primarily hired computer science grads, fresh out of school, and treated the database with less seriousness at the beginning than should have been the case — far more priority was placed on the user experience than virtually anything else.”

Silver Smith also said that Google has over-emphasized having brick-and-mortar locations in their ranking algorithm — despite the fact that many service providers don’t need office space because they work on-site at their customers’ locations. According to Silver Smith, the heavy weighting of that factor makes it makes it more difficult for service providers that don’t need a physical location to achieve high rankings, ultimately incentivizing them to set up fake listings just to be represented equivalently to businesses with street addresses.

In 2017, a Google-sponsored study by researchers from the University of California, San Diego concluded that just 0.5% of the local searches they looked at contained false listings. Search consultant Mike Blumenthal called the results “meaningless,” partially due to the limited and skewed data that Google provided. Danny Huang, the study’s lead author, who was also a paid Google intern at the time, acknowledged, “All I was doing was eyeballing in a scientific manner.”

Shortly after the WSJ article was published, Google emphasized in blog post its ongoing efforts to address Maps spam and scammers, saying it has taken down over three million fake business profiles, of which more than 90% were removed before they could be seen by users. It also stated that it is donating settlement funds from lawsuits against bad actors to organizations that educate consumers and businesses about fraud, and reiterated that users can flag profiles for removal.

The company added that it’s developing new ways — both manual and automated — to fight scammers, but kept specifics under wraps, explaining “we can’t share too many details about these efforts without running the risk of actually helping scammers find new ways to beat our systems—which defeats the purpose of all the work we do.”

The company has also signaled it may start charging for Google My Business features. In April, it sent a survey to some local businesses asking if they would be willing to pay a monthly subscription fee.

The winners and losers

“The winners are pretty clear, it’s Google and the spammers,” said Dan Leibson, vice president of search for Local SEO Guide Inc., pointing out that spammers are siphoning off customers and Google is cashing in on ads bought by businesses trying to get their listings to appear above the spammers’.

“Everyone else is losing in some way. The least affected type of business is probably large, multi-location brands as simple spam signals will have a hard time outranking the true relevance and prominence of these businesses,” Leibson continued, stating that a fabricated series of “hardware stores near me” listings would be unlikely to supplant The Home Depot from search results.

The frequency of fake listings may also impact consumer preferences. Customers who might otherwise support local businesses may instead choose to play it safe by patronizing larger, more well-known companies, making reaching new customers even more of an uphill battle for small or emerging brands.

Legitimate local businesses also have to compete with each other for whatever customers are left. It’s possible that the practice of adding keywords to a GMB profile was initially a method to regain organic visibility and fend off fake listings, but it has also put other small businesses in a worse position — especially if they want to play by the rules.

What we can do and what needs to be done

“Standing out in a sea of fake listings will be all about building a brand and diversifying your local presence,” Youngblood advised, “I typically recommend clients focus on Google, Bing, Facebook, Yelp, at least one vertical, and of course their own website.”

“We also recommend that clients engage locally. Find popular social media accounts in the local area and engage with them (not necessarily ‘influencers’), support non-profits such as community radio, dog rescues, theaters, and homeless charities,” Youngblood said, adding that, “You never know when Google or another platform will suspend your listing, so making sure you’re gaining reviews on other sites consumers might find while researching is important.”

“The best way businesses can stand out is to outrank the spammers and have a legitimate brand,” Leibson concurred, concluding that (in addition to reporting fake listings and being vocal) users and businesses can even raise the issue with their elected representatives — an increasingly viable option as Google continues to make headlines for anti-competitive behavior.

Of course, Google can better enforce its current policies and change its algorithms to hinder current spam tactics. Marketers and SEOs are also quick to offer solutions ranging from deemphasizing GMB profile names within search algorithms to requiring vocational licenses as part of the registration process to having users upload a proof of purchase before they can leave a review.

“Google’s success and market dominance mean that it bears a higher responsibility than merely throwing together jumbles of business listings on maps and leaving it up to consumers to discern which may be real or false,” Silver Smith said.

The company’s dominance stems from its search algorithms and the services and systems built around them. As long as those systems exist, there are those that will seek to exploit them at the expense of honest participants. Fortunately, there are solutions. Marketers and business owners must continue pushing Google to prioritize them. 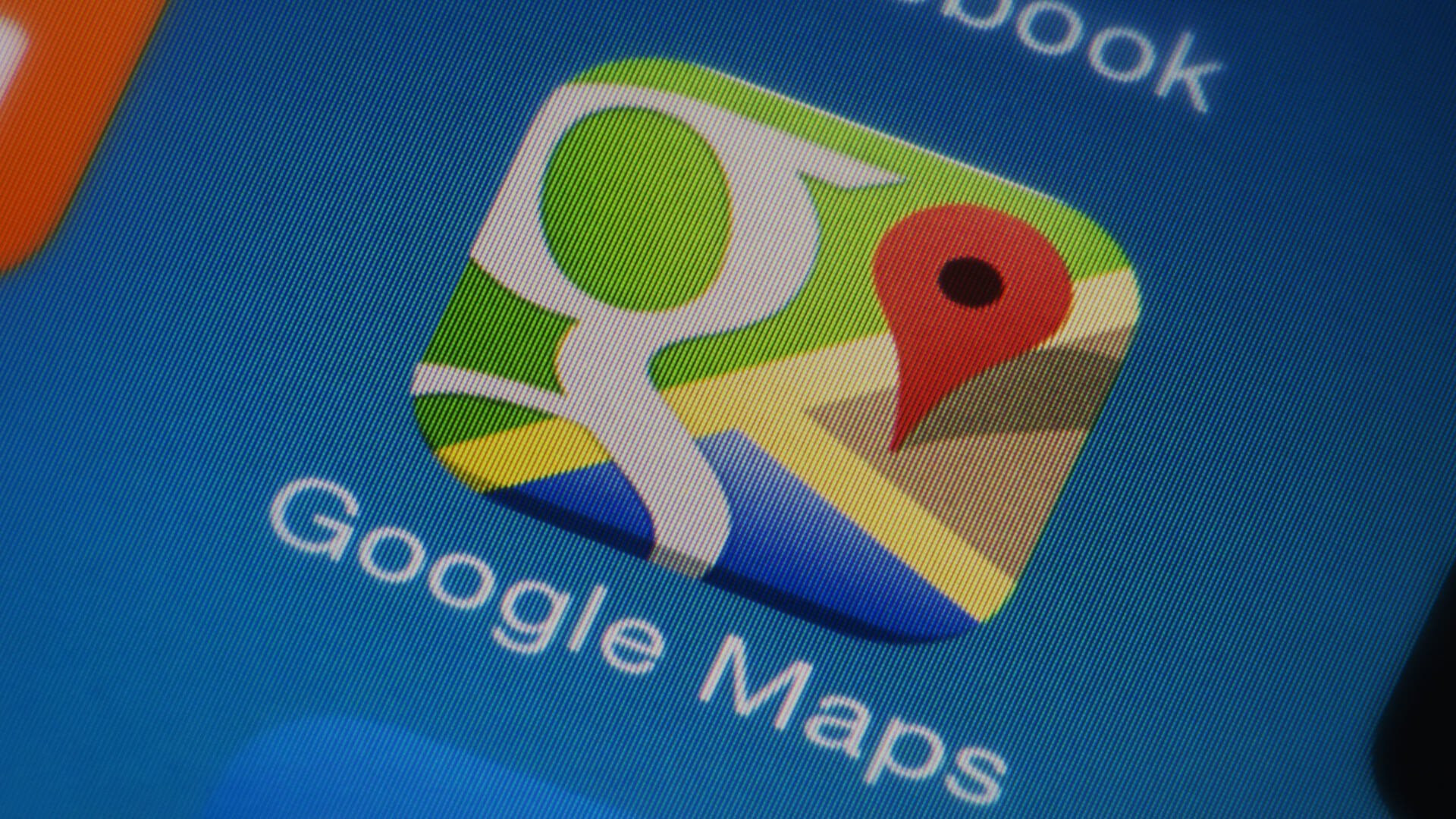