As part of a report on the use of location data by brands and agencies, Lawless Research and Factual investigated marketers’ attitudes toward “The advertising oligopoly of Google, Facebook and Amazon.” The survey found that these respondents (700) were spending on average 43% of their ad budgets on the three platforms; 65% of them say they want “alternatives.”

Amazon is now the third largest digital ad platform in the U.S. and many agencies plan to increase their Amazon spending. Despite this growth, most of their ad budgets are still going to Google and Facebook.

Bigger budget, greater spend share going to top platforms. It turns out, the larger the ad budget the larger the chunk being spent on the major platforms. For companies with an annual budget of $50 million or more, 46% are spending at least 60% of their budgets with “The Oligopoly.” 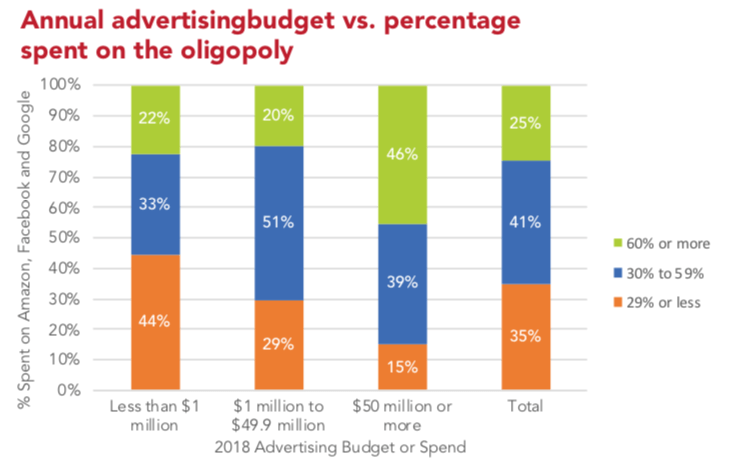 The survey then asked, “Is your ROI on Facebook, Amazon and Google, lower, about the same, or higher than on other platforms?” Just under half (49%) said higher, 44% said about the same and 7% said lower. It’s not clear how reliable these estimates are, however.

Seeking alternatives. Roughly 65% of respondents said they were seeking advertising alternatives to Google, Facebook and Amazon. Presumably they are aware of programmatic or direct alternatives, though they reportedly said, YouTube (Google), Instagram (Facebook), and Twitch (Amazon), when asked to identify the alternatives they were considering.

The report goes on to state that “nearly two-thirds (66%) of brand marketers and agencies are extremely, very or moderately concerned about the oligopoly limiting their advertising options.” For those in the more-concerned category, there’s greater emphasis on alternatives, which makes sense. Among the 34% either “very or extremely concerned,” 78% are seeking alternatives. 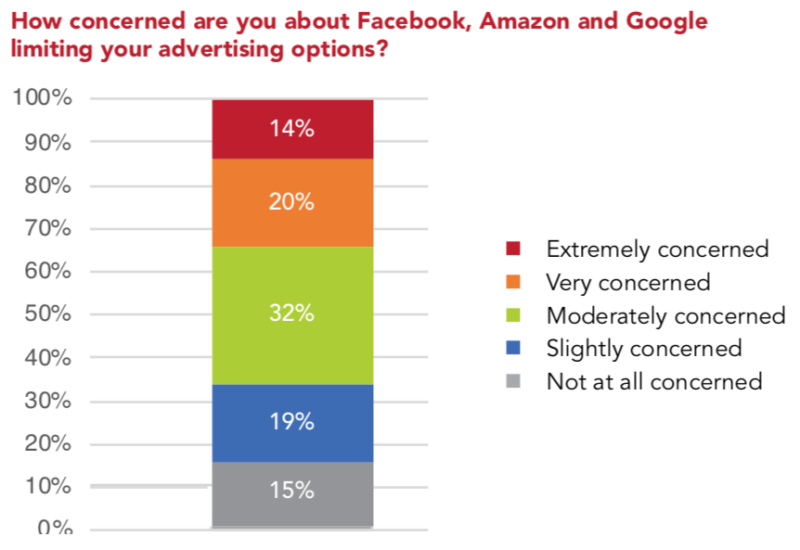 Why we should care. The report treats the three platforms as a kind of unity, which is problematic on several levels. Their policies, ad options and performance are not uniform. Indeed, Amazon is an “alternative” to Google and Facebook. Interestingly, however, the report says that even for respondents who say “The Oligopoly” outperforms other platforms, 67% still want other options “to improve advertising outcomes.”

At a time when antitrust investigations are gearing up against all three companies, the findings in this report could make their way into DOJ or FTC files. Yet, it’s not really clear how serious these findings are or the depth of marketer discontent. More research needs to be done.

It’s possible what’s being exposed or vindicated is the principle of competition; marketers like the idea of more choices. It’s also possible that these respondents are voicing specific objections and concerns about the three.