When I first started in this industry in 2006, there was a multitude of sites that small businesses could ask customers to review them on. Over a decade later, we find that there are very few websites in this space that are actively generating user-generated content from consumers. This makes it even more problematic when a business receives a negative review on one of these third party sites because it is often harder to combat if you don’t have lots of positive reviews already to balance it.

It also becomes very confusing to consumers and marketers when you factor in Google not enforcing their own schema guidelines for third-party review sites. Here are a few examples.

Reviews are not visible on the page

According to Google’s review snippet guidelines, it says: “Make sure the reviews and ratings you mark up are readily available to users from the marked-up page. It should be immediately obvious to users that the page has review content.”

This is definitely not the case for the reviews Google is showing under reviews from the web on business knowledge panels. 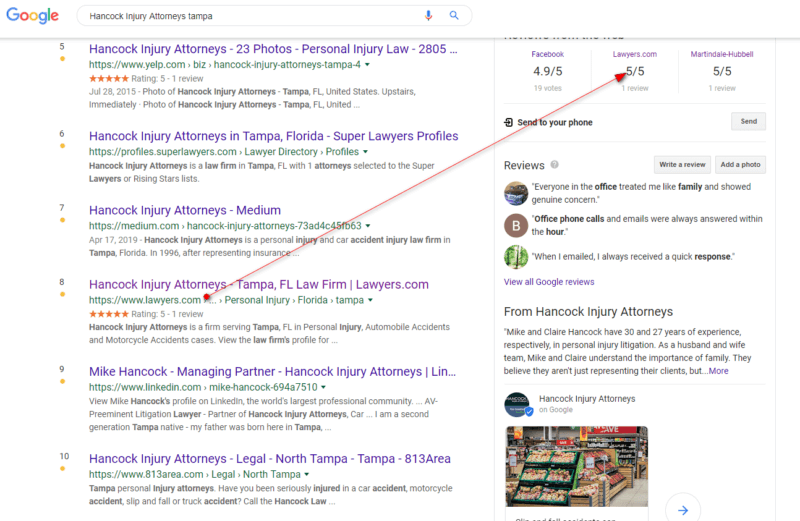 Here is an example of a law firm in Florida. They have legal directories listed in their Knowledge Panel that are supposed to have one review each that is a rating of 5/5. 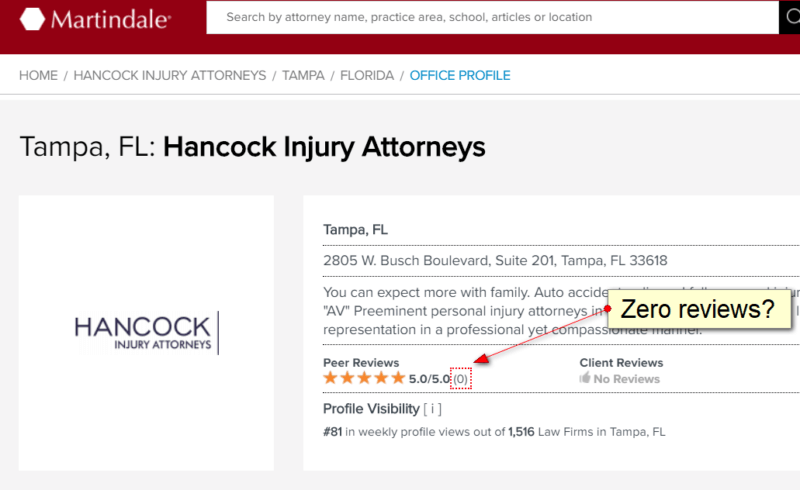 When you visit either profile (one and two) it doesn’t show any reviews which is a really confusing experience for a consumer.

Tom Waddington reached out to me about a case where a landscaping business he was helping had a negative average appearing in his Knowledge Panel. This business had Google showing a 1 out of 5 average according to Angie’s List.

When you actually visit their listing on Angie’s List they have a total of 10 reviews with the following scores:

I’m not a mathematician but I honestly have no idea how to calculate that and end up with an average of 1/5 based on 19 reviews. I also have no idea what I’d tell this business about how to fix it.

Facebook is another one that I continually see and cannot figure out.  In this example, Google shows a 4.8 average based on 43 votes.

When I visit the profile on Facebook, I see two different counts. One says 49, the other says 18.  Neither match what Google lists.

It doesn’t get much less confusing with Foursquare. This auto parts business shows 6.9/10 on their Knowledge Panel based on four votes.

When I visit the profile, I only see two reviews, both which appear positive but don’t display a rating out of 10 so it’s hard to say how this average is getting calculated.

Reviews are duplicated from other sites

According to Google’s review snippet guidelines, it says: “Sites must collect ratings information directly from users and not from other sites.”

In this insurance agent’s case, the reviews from around the web are showing a profile from BirdEye that has six reviews on it.

These six reviews are actually his Google reviews, which are already present in the Knowledge Panel.

Here is another example with Judy’s Book showing six votes.

When you visit the profile it shows that three of the reviews are from Judy’s Book and three of them are from Insider Pages.

As a marketer, I want there to be more competition in the review space and I also wish it was easier to show small businesses the benefits of getting reviews on third parties. In my opinion, I think Google would be better off removing “Reviews from the web” at this point due to the lack of consistency in their guidelines being enforced and the confusing experience it gives users.

Opinions expressed in this article are those of the guest author and not necessarily Search Engine Land. Staff authors are listed here.

Joy is the owner of the Local Search Forum and Sterling Sky in Canada. She is also the author of The Expert’s Guide to Local SEO, which is an advanced training manual for people wanting a detailed look at what it takes to succeed in the Local SEO space. She has been working in the industry since 2006. She is a faculty member at LocalU and enjoys speaking regularly at marketing conferences such as SMX, LocalU, Pubcon and State of Search. You can find her on Twitter or volunteering as a Product Expert on the Google My Business Forum.