A ‘Local Campaign’ placement. Part of Local Campaigns, the ads are designed to drive visits to local businesses and retail locations. These fully automated units run across Google properties, including search, Maps, GDN and YouTube. 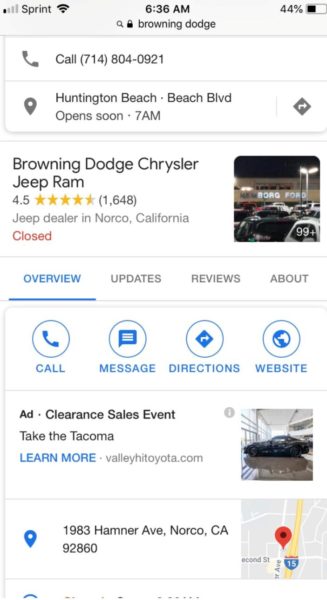 The business listing is for a Dodge-Chrysler-Jeep dealer in California. The ad is for Valley Hi Toyota, approximately an hour away from the Chrysler dealer by car.

I was not able to recreate this example or find another comparable one on my own.

Can’t pay to remove the ad. Discussion about the ad unit on Twitter refers to this as the local Knowledge Panel but it is technically the local business profile. There’s also speculation that Google is gearing up to charge business owners to remove the ad. However I confirmed with Google that businesses will not be asked to nor can they pay to have the ad removed.

In April, Google fielded a survey to business owners, which some agencies also received, asking about potential future features and capabilities for GMB. This was a test and most of these things probably won’t materialize. However, one of the proposed items was “get leads from competitor profiles.”

The ad unit above is not that proposed feature but is consistent with its spirit. Much of local SEO reaction and conversation that follows Fisher’s original Tweet is critical of the move.

People I’ve spoken to about this in the local SEO community feel generally that Google shouldn’t be putting ads for direct competitors on business profiles. Further, some argue it may also be confusing to consumers looking for specific businesses.

Why we should care. There’s a sense that the GMB profile is “owned” by the business. However that’s not correct; it’s Google’s property, just as Facebook owns and controls local Facebook Pages. This is something that businesses should be sober about. However, Google must also be mindful of too-aggressive monetization of local. Some SEOs are saying this is such an example.

It’s probably better that businesses can’t pay to remove these ads because that would be perceived as a form of “extortion,” something Yelp has been accused of — it’s advertisers don’t have competitor ads on their profiles.