Are your Google text ads getting truncated? Here’s what to consider 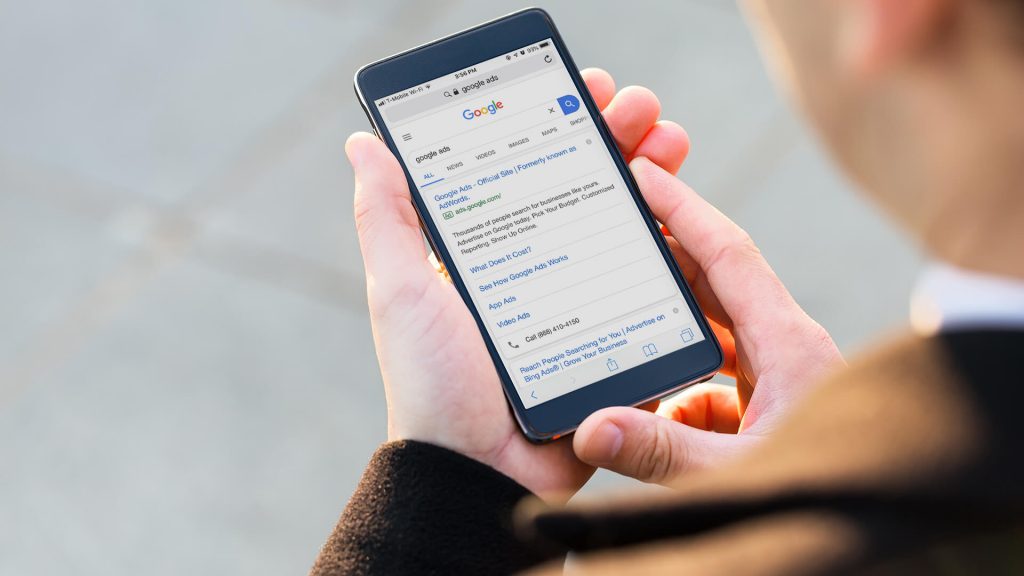 This week, Andrea Cruz, digital marketing manager at KoMarketing noticed text ad headlines and descriptions getting cut off and wondered if is new.

I looked back at some older screenshots of search results and didn’t see truncation happening very often. But now I’m easily able to replicate the kind of result Andrea saw, including in the first text ad position, as in the example below. 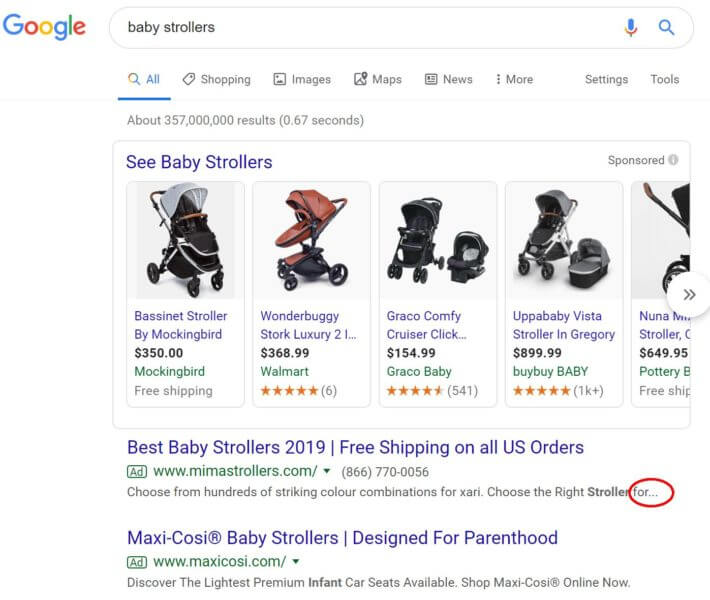 Truncated headlines and descriptions in expanded text ads aren’t new, but it could be that it’s happening more often lately with certain ad renderings, which frequently include no ad extensions. Is the pendulum swinging back to simpler ads?

Why does ad truncation happen?

One thing to keep in mind is that truncation is about pixels rather than a specific character count, and wider characters use more pixels. In 2016, when expanded text ads were introduced, Google said advertisers should consider limiting headline length to 33 characters to keep them from potentially being truncated. That’s still the suggested length in the help center, even since Google added the third headline option:

“In some situations, Google Ads needs to shorten your text, usually with an ellipsis (“…”). This could happen if your ad text frequently uses wider characters (like “m”) instead of narrower characters (like “i”), because your headline text could be wider than the space available for it on some browser sizes. With most Latin languages, you can avoid this effect by limiting your line’s overall character count to 33 characters total.”

Additionally, if the ad preview in Google Ads shows the full headline, Google says it will generally render completely.

For descriptions, Google doesn’t give specific guidelines, and the preview tool won’t show truncation. Again, pixels will matter. In several results I looked at, description truncation happened between 84 to 86 characters, but a description with 91 characters displayed in full on one line because it had a lot of narrow letters.

It may appear that truncation is happening more often because of the way Google often displays text ads now. The text ads above the organic results often show with just one description line, particularly on desktop.

Consider this screenshot of a results page for the query “car loan” captured last year in July 2018: 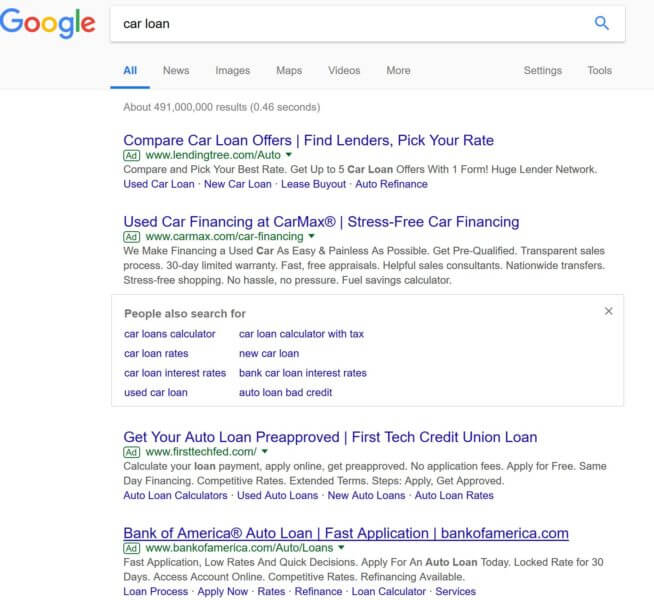 Now, compare that to a results page served today in which the ads in positions two to four include just one line of description copy (the last ad’s description is truncated) and no ad extensions below them: 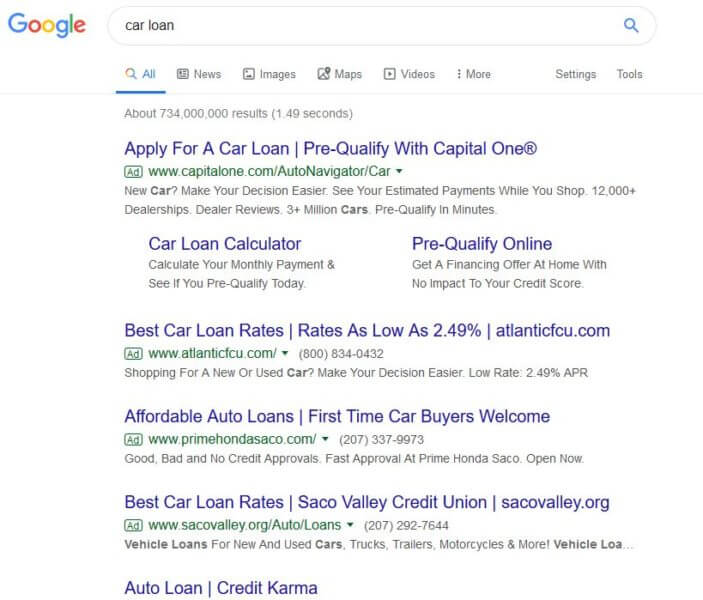 In a result from today, only the first ad shows ad extensions. The other ads show just one line of description copy.

I see this shorter ad rendering regularly across various queries, particularly on desktop. And the lack of ad extensions is interesting. Ads at the bottom of the page on mobile and desktop tend to show more description copy as well as ad extensions than ads above the organic results.

Google is always experimenting with the way it displays ads, even within the same results page. In the mobile example below (from today), notice the Expedia ad in the second position has a description that gets truncated and no ad extensions showing with it. 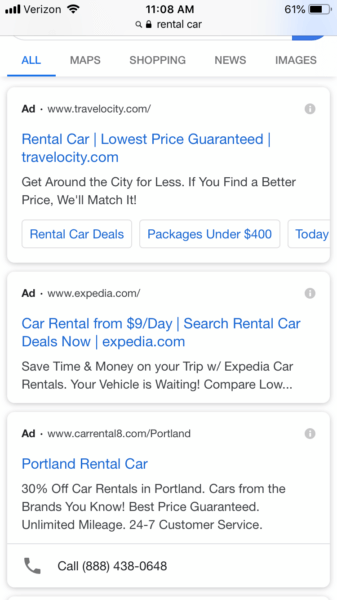 After refreshing that search result page later in the day, Expedia’s ad, still in the second position, appears with a description followed by callout extensions and an app extension, while the Hotwire ad in position three shows with just a description. 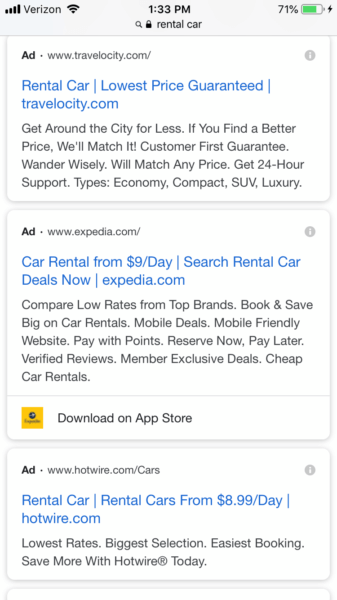 We don’t have control over how Google chooses to display our ads from one search result to the next, and it will vary based on device, browser and other contextual signals. It also decides when and what ad extensions to show. But we do have some control over truncation. If you want to avoid having your titles and descriptions cut off, experiment with length.

Something more interesting to watch may be the frequency with which your ad extensions show. It’s interesting to often see simpler ad treatments above the organic results these days.

Ginny Marvin is Third Door Media’s Editor-in-Chief, managing day-to-day editorial operations across all of our publications. Ginny writes about paid online marketing topics including paid search, paid social, display and retargeting for Search Engine Land, Marketing Land and MarTech Today. With more than 15 years of marketing experience, she has held both in-house and agency management positions. She can be found on Twitter as @ginnymarvin.